The 4 winners of the Oslo Municipality’s Garden Awards for 2022 have been chosen, and Linderud community garden – the site of EdiCitNet’s Living Lab – won the award for this year’s garden with a focus on environmental, social and economic sustainability!
In total there are 4 different categories: 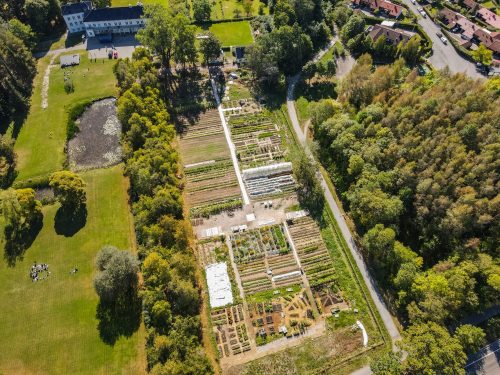 Oslo Municipality’s Garden Awards honour gardens that contribute to making Oslo a green, beautiful, healthy and people-friendly city. The garden prize is a competition with long traditions and was first held in 1921. Congratulations Linderud community garden!

We are more than happy to announce the successful completion of two workshops held in Carthage to develop the city’s Edible City strategy. 10 participants from the Administration (different ministries and judicial bodies) and 24 participants representing the different actors of Carthage (civil society, associations, NGOs, education, landowners) met in two workshops to discuss with members of the local City Team the edible future of Carthage. 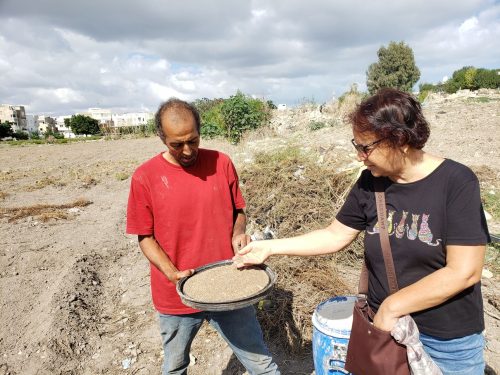 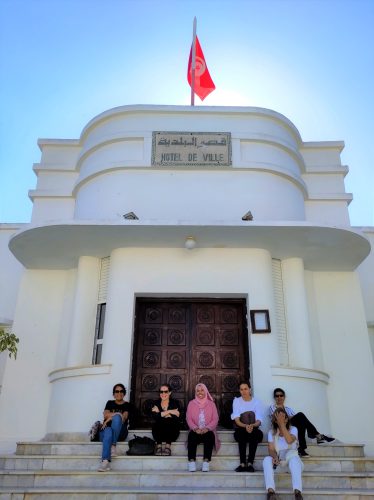 The municipality of Carthage, the REACT association, the University of Natural Resources and Life Sciences of Vienna (BOKU), the University of Brighton and Transition Oststeiermark organized and facilitated exchanges and discussions with the participants around 3 themes integrating the common vision to collect their feedback, suggestions and to co-develop, together, the foundations of the transition pathways. 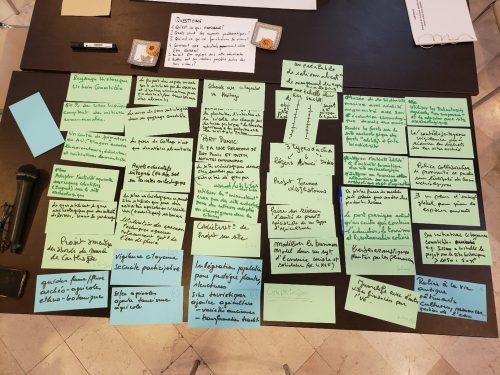 Two full and productive days during which the City Team of Carthage was able to note, on the one hand, the magnitude of the institutional and regulatory challenges to be met and, on the other hand, the adherence of the participants to the process of transition to an edible city. Some landowners expressed their commitment to make their archaeological land edible. School principals expressed their interest in implementing plans on how to transition to edible schools. Civil society reiterated the need for safe, recreational sites for leisure activities. Ministries described the limits of what was possible and negotiated pathways. Farmers, including the Edible Cities Network Award winner from 2021 Isaam Ben Chaaben, presented pilot projects. EdiCitNet and all the participants share the vision of an edible Carthage that is one step further to reality. 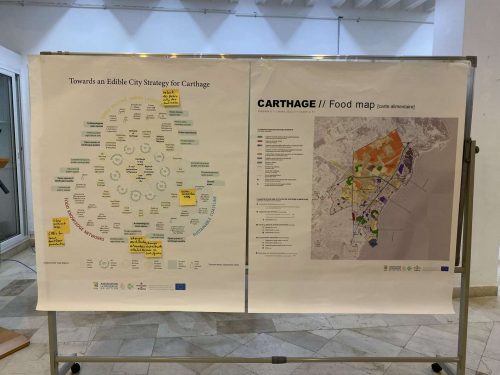 Our third and last for this season City Exchange took place September 21-23 in Rotterdam.

On the first day, we had the pleasure to cycle round the Groene Connectie, an 8km-long circular route which connects green initiatives throughout west Rotterdam. Our starting point was Spoortuin, a community garden along the train tracks. There we were welcomed by the local City Team and told the story behind this garden in particular and the whole Green Connection project in general. From there, we cycled to Voedseltuin Rotterdam, a community garden which, with the help of volunteers, produces healthy food for the local food bank. After having lunch there, we cycled south to Groene Oase op Zuid, where we learned about how the community is dealing with having to move their garden to a new place because of real estate development on the current site. Our next stop was the impressive Rotterdamse Munt, a real urban herb farm and events space. The place also has a shop where visitors can buy all sorts of teas, seeds and other products produced on site or by other green initiatives in the city. We finished our day with dinner at Wijkpaleis, a place which is a real success story of how neighbors joined forces to buy a former school building from the city in order to establish a community center. The building, whose top floor is still used as a school, now hosts also all kind of workshops, community dinners and other events.

On the next day we all gathered at the former Berberis school garden complex, where Natuurtalent now offers job opportunities to people who face challenges accessing the job market. The organization shares the space with Stadsboerin Rotterdam, a highly yielding CSA. After a chat with the farmer behind the CSA, we had a “speed dating” workshop, where participants had to team up with someone, they don’t know that well, and discuss what we considered to be the main values in our work. The talks were followed by a lunch in the garden and then we all headed towards the Rotterdam City administration towers, where the second part of the day took part on the 40th floor and with amazing views over the whole city! Here we met Rotterdam’s green broker and representatives of the Rotterdam Health program and the Rotterdam Climate program and discussed Rotterdam’s greening policy. The day program ended with a workshop on the use of the Diamond Model, led by project partner Alice Bischof.

The last day started at Stadskwekerij De Kas, a beautiful reclaimed inner yard which is now a knowledge center for urban ecology and biodiversity; as well as a plant nursery. There we saw the presentations of three different green initiatives—a neighborhood greening project, a rain garden and a community garden—and each participant chose where to go and help with some field, hands-on work for the next hour and a half. After the fun work at the different sites, participants gathered for lunch at Tuin op Hofbogen, a community garden and public park on the roof of an abandoned train station. The last activity of the exchange was a trip to the edible forest part of the Rotterdam Botanical Garden.

A huge thank you to everyone who made this possible!

This series of City Exchanges was extremely inspiring and we can’t wait to visit Andernach next year!

After the first EdiCitNet City Exchange happened in Berlin at the end of August, the second in the series of events took place September 13-15 in Oslo and was organised collaboratively by all project partners in the city, led by the Agency of Urban Environment. Participants from a total of seven cities took part in the event.

The entire first day took place on the grounds of the beautiful Linderud Manor, a historical estate in Oslo’s Bjerke district, whose garden, the Linderud community garden (in Norwegian Linderud nærmiljohage), hosts EdiCitNet’s Living Lab. After a short introduction round, participants could meet the Oslo City Team and other initiatives working on site. The numerous projects happening on Linderud’s grounds range from job training offers for people struggling with drug addiction, organized by the Salvation Army; through outdoors teaching programs for the children from the local school; summer job opportunities for teenagers organized by EdiCitNet partner Nabolagshager; to green urban food entrepreneurs growing herbs and mushrooms in the garden. The busy day ended with a dinner in the garden, prepared by the lawyer-turned-chef Inka Chef, who used onsite-grown ingredients to prepare one of the most delicious veggie burgers we have recently tried!

The second day of the exchange took off at the recently built Økern Portal center, where, thanks to the presentations of municipal workers, participants could learn more about Oslo’s Strategy for Urban Agriculture 2019-2030, its funding scheme for urban agriculture-related projects, its Sustainable and Healthy Food Program, or the role of the Oslo center for urban ecology. Furthermore, the Økern portal is home to one of Europe’s biggest rooftop gardens, managed by U·Reist, who were kind enough to give us a tour of the CSA, the public park and the comercial garden that top the center. What a sight!

On the last day of our visit, we got to know a series of urban gardens, as diverse as Oslo itself! Our first stop was Ulvenhagen, a newly established community garden, which is a real green oasis between two major roads in an area of the city that is being quickly developed. We continued towards one of Oslo’s most famous urban gardens, Losæter, where we met the director of the Environmental Agency, learned about the experiments the gardeners are doing with companion planting and had lunch. Our City Exchange finished at the school garden Geitmyra, where every interested school in the city is offered a plot, which they can manage according to their own criteria. Additionally, the garden offers crash courses in gardening for the teachers who will later be in charge of the school plot.

Three days full of inspirational talks, networking and, above all, Oslo’s edible side! A heartfelt thank you to everyone who made this experience possible!

The Edible City Project is presented at Envirofest 2022 in Tunisia

An awareness action on the edible city concept of the EdiCitNet project was carried out by the project team within REACT in collaboration with the project “To preserve in herbarium the flora of Tunisia and to work out a tool of assistance to its identification: FEM/SGP” in the framework of Envirofest. The activity was aimed at children under the title “Let’s learn botany by playing”. The children were asked to guess and define seeds and plant parts while closing their eyes. They had to (i) define the name of the plant and/or seed, (ii) identify if it was a vegetable, spice or fruit while using their other senses: touch, smell and taste. This activity allows them to develop their sensory abilities towards the plant world, to create other links with plants and to identify/visualize plants daily used in our food. Seeds of spices (Coriander, Caraway, Cumin), vegetable seeds (Pumpkin, Corn, Carrot, Parsley, Chard) and aromatic plants (Jasmine, Thyme, Rosemary) have been carefully selected for this event. The exercise is not easy for the children. Expressions of astonishment, surprise and curiosity were complemented by questions that were often abundant. Laughter broke out throughout this highly appreciated awareness activity. Samples of seeds (pumpkin, corn) were distributed to the children with explanations on the steps to follow to sow them since it is the right season for planting.