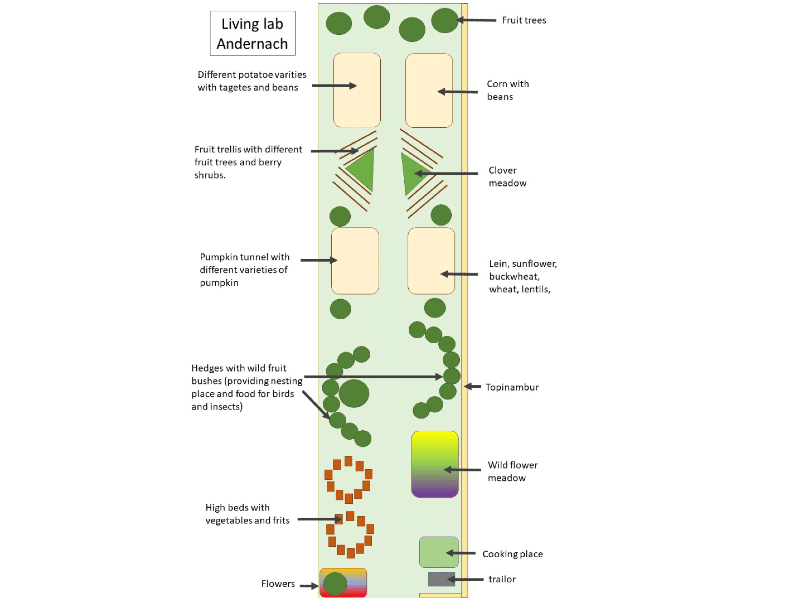 The City Team was focused on the planting concept for the living lab and the integration of young children (age 4-10 years). Participants include representatives of kindergartens and primary schools, the Perspektive gGmbH (farmer and organizer), representative of a NGO and the city team chair.

The city team designed a planting concept regarding the annual Topic “biodiversity” (the annual topic was selected by the City Team during the meeting in december 2019). The concept is based on the following aims:

– Demonstration of biodiversity in plant varieties: We plant different varieties of potatoes and pumpkin with different colours, shapes and taste.
– Demonstration the positive effect of supporting plant partners: We plant all plants in mixed cultures, such as potatoes together with tagetes, wheat with lentils and corn with beans.
– Demonstration of biotope diversity: We show that different plants create different biotopes during the growing season, providing shadow and shelter, food and nesting material for various animals.
– Demonstrating the impact of plants on microclimate: We show that plants influence the microclimate thereby cooling the surrounding area and reducing evaporation.
– Demonstrating different food processing steps: We plant fruits (e.g. berries) and vegetables (e.g. tomatoes) the children can eat directly. We plant crops that need to be cooked (e.g. potatoes) and crops that need to be threshed (lentils), milled (wheat) or pressed (lein).

The city team decided how to integrate kindergartens and primary schools into the planting season. Dates for different planting activities in spring and early summer were identified and special events were designed (such as rabbit hunt with a falconer in february or construction of worm boxes in may). The city team decided that special events should be also available for the public. Hence such events were split into two parts, one part designed for pedagogic institutions in the mornings and the other part designed for the public in the afternoon.

All dates will be uploaded on CMT Andernach page in February 2020.

The next city team meeting regarding planting activities will be on 24.06.2020 in order to plan the planting/harvest activities in late summer and autumn.